All big cities in the country are teeming with young and ambitious professionals prospering year after year in their life and career by following a relentless routine of hard work involving little physical work. Some of them sit before their computers for 12 hours and more each working day.

They are aware that the pressure of this relentless routine is taking a heavy toll on their physical health. Some of them join a local gym and also follow certain dietary plans thinking they have now tackled their problem. They weave a few visits to the gym into their week’s routine and also are particular about their salads and cucumbers.

As a fitness coach for more than a decade in a metropolis, one has noticed that, in most cases, their resolute attention to their overall fitness lasts only four days a week. The remaining three days of the week, they tend to freak out with a vengeance.

A typical case is that of this 30-year-old trainee who joined our gym about a year ago. A month after joining the gym, he spoke to his coach about his worry. He wasn’t making quick enough progress in reaching his fitness goal. He was in a hurry.

He said: “My wedding is to happen two months from now. The date was fixed a month ago. I joined the gym immediately after the families fixed the date, because, to tell you frankly, I want to look fine in the Jack-trousers I propose to wear on the wedding day.”

He said his target was simply to be able to buckle his waist belt on its fourth hole, or maybe the fifth, instead of the first hole at the time of joining the gym. It was like bringing down his golf handicap during the time left for the big tournament. He didn’t play golf, he said, but was using the metaphor only to express what he wanted to say. His waistline goal seemed so far away and time was running out. He wanted to know what was wrong.

This took us to a closer look at what he had been doing since joining the gym. He does workouts four days a week diligently—Tuesday to Friday. Mondays he usually has a dull headache requiring a couple of aspirin tablets in the morning. The weekends are, of course, for unwinding and he had friends aplenty similarly inclined. He followed the dietary plans given to him also, but only three days a week.

On Monday, he could eat very little, but drank a lot of water, because of the hangover from Sunday’s revelries. And from Tuesday to Thursday, he followed a spartan diet regimen which is a severely edited version of the diet plan given to him, besides doing vigorous gym workouts. He said he guessed he could thus compensate for his weekly excesses beginning from Friday night to Sunday night, eating whatever he wanted to eat and drinking quite a few bottles of beer with friends, sometimes going on short picnics.

His week, therefore, is like the swinging of a pendulum from one extreme to the other. The momentum it gathers as it swings to one extreme provides the kinetic energy for its swing to the other side. Extreme care about diet for three-four days together, keeping out all the delicacies you love to eat, builds up a craving that makes you swing to the other extreme when you let yourself unwind during the weekend.

It took a while to convince him to choose balance and moderation over swinging from one extreme to another. But when he did, things turned around in his favor in a big way. Instead of choosing a diet eliminating every food he likes on weekdays, he started practicing moderation.  Instead of going completely off track on weekends, he decided to limit eating out and alcohol to only once in a while. Instead of spending the whole Sunday on the couch watching Netflix, he chose to go for walks – because he did not feel deprived, and felt  the need to reward himself for the hard workouts and dieting he did over the week.

Happily, by adopting such conscious measures to even out his oscillations from one extreme to the other, assisted of course by diligent gym workouts, he was able to tighten the buckle of his waist belt on its third hole by the time the wedding day arrived two months after our going into his problem. No excesses, moderation in everything, was the ideal he strived for.

He looked dapper in his maroon Jack-trousers on his wedding day, although, at 82 kgs then, looked rather substantial beside his petite young bride, a colleague at his workplace, wearing a lavender Lehenga Choli with white floral embroidery all over.

It is nearly nine months now since their wedding. Nowadays, they come to the gym together. Miraculously, he has brought down his weight by another 10 kgs since his wedding.

“Seventy-two kgs! Way to go, partner,” she was heard telling him in the gym the other day as he stepped out of the weighing machine after his heavy morning workout, sweating, feeling rather proud of his achievement.

Obviously, lady discipline has taken full control of the proceedings.

Originally published on The Tribune. 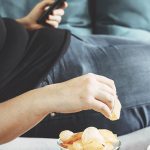 How to Solve Your Over-Eating Problem From the Root?

Planning to Resume Exercise After a Long Break?

You Cannot Out-Exercise A Bad Diet

How to Solve Your Over-Eating Problem From the Root?